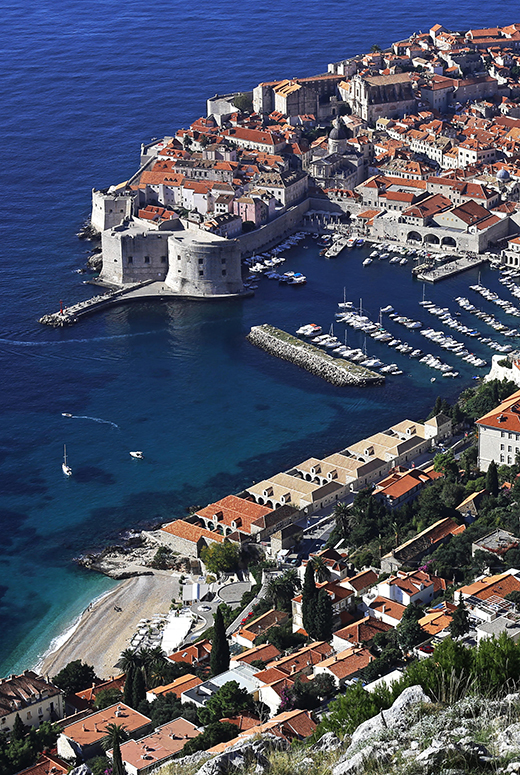 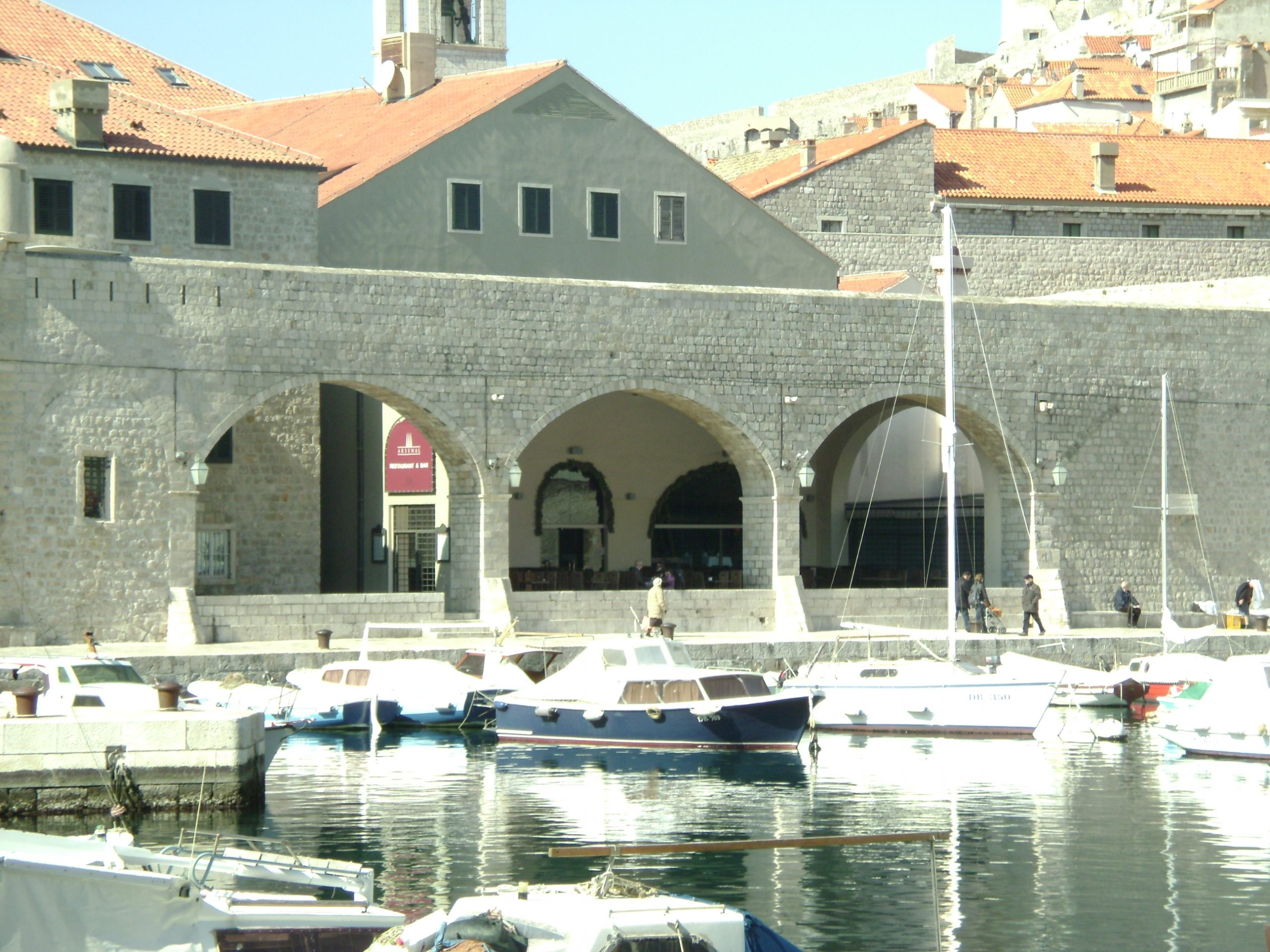 The Arsenal is located in the city harbor. Originally, it was composed of 4 vaulted sections to house 4 galleys that used to protect the town. The state defence galleys were built, guarded and repaired here. It is believed that its construction started in the 8th century. During its long existence, it was adapted many times, until it finally received its current appearance as the favourite coffeehouse for the people of Dubrovnik. 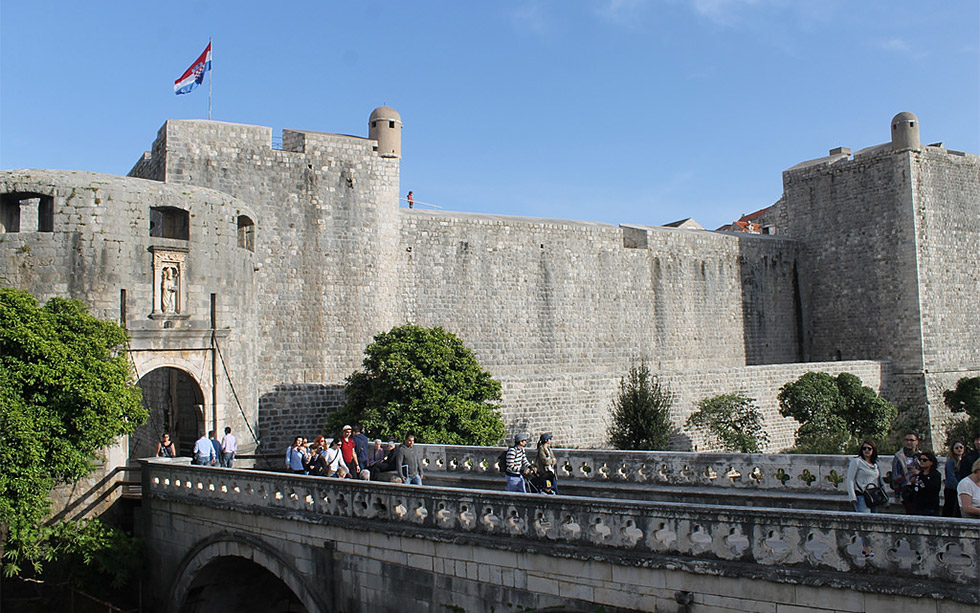 Pile Gate is the main entrance to Old Town. The origins of the name goes back to the Greek word “pylaj”, that is gate. Built during the 15th century, it used to have a wooden drawbridge which used to be pulled up at night to prevent unwelcome guests entering the medieval, walled city. The drawbridge was later replaced by a stone one. Nowadays, the beautiful stone bridge leads across the small green passage (ex moat) through the Gate to the Old town and down the steps to Stradun, the Town’s main promenade. 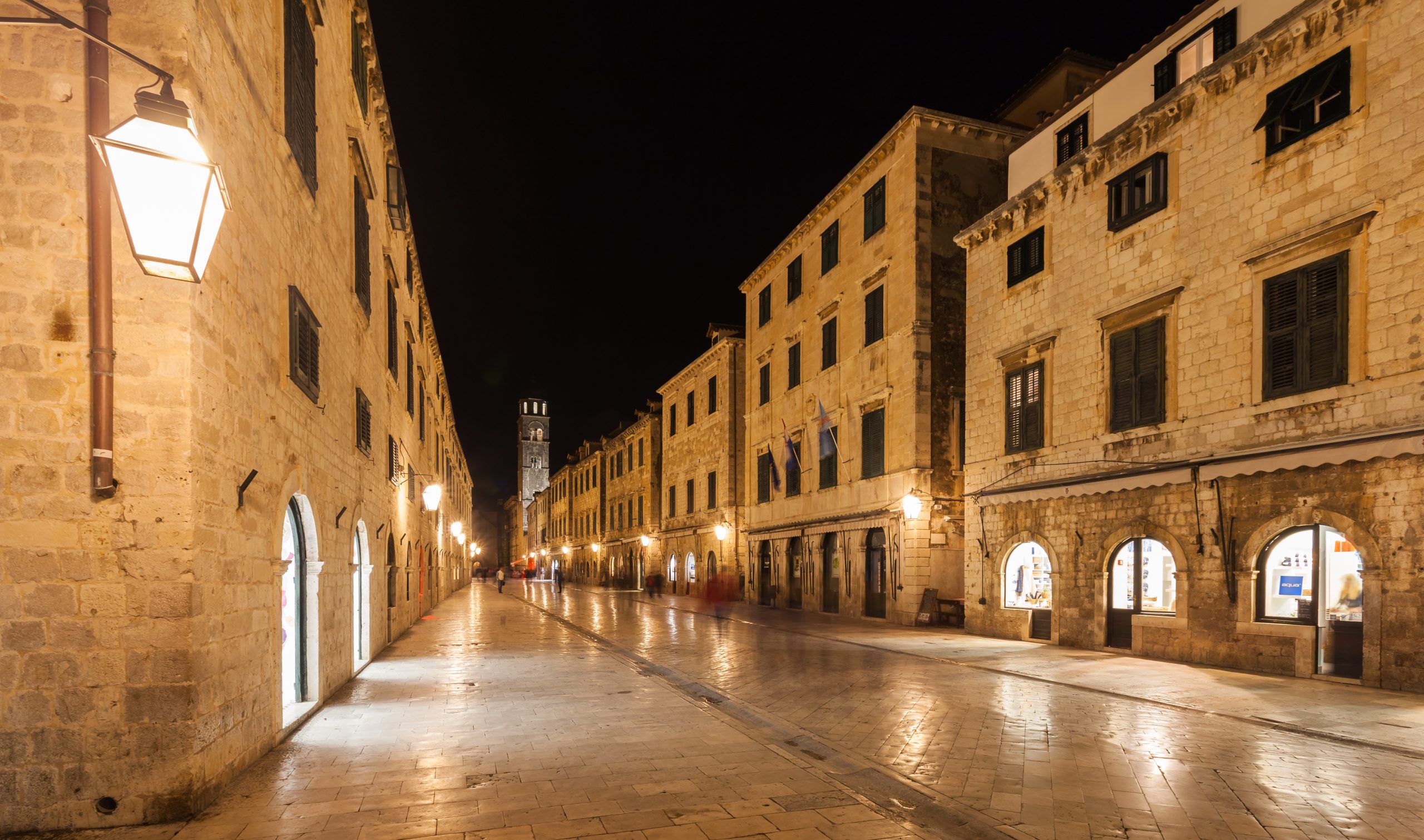 The famous Dubrovnik Stradun, or Place, is a limestone-paved pedestrian street that runs some 300 metres through the Old Town, the historic part of the city surrounded by the Walls of Dubrovnik. It is the favourite walking area for all the people of Dubrovnik, especially young people and tourists from all over the globe. It was built after the great earthquake of 1667, during the general reconstruction of the city. Before the earthquake the houses which line the street were not so uniformly designed as they appear today, with many of them featuring arcades and elaborate decorations. Following the 1667 earthquake, the Republic of Ragusa passed a law which specified the layout of all future residential buildings constructed in the city. Because of this all of the 17th-century houses lining the Stradun share the same pattern. 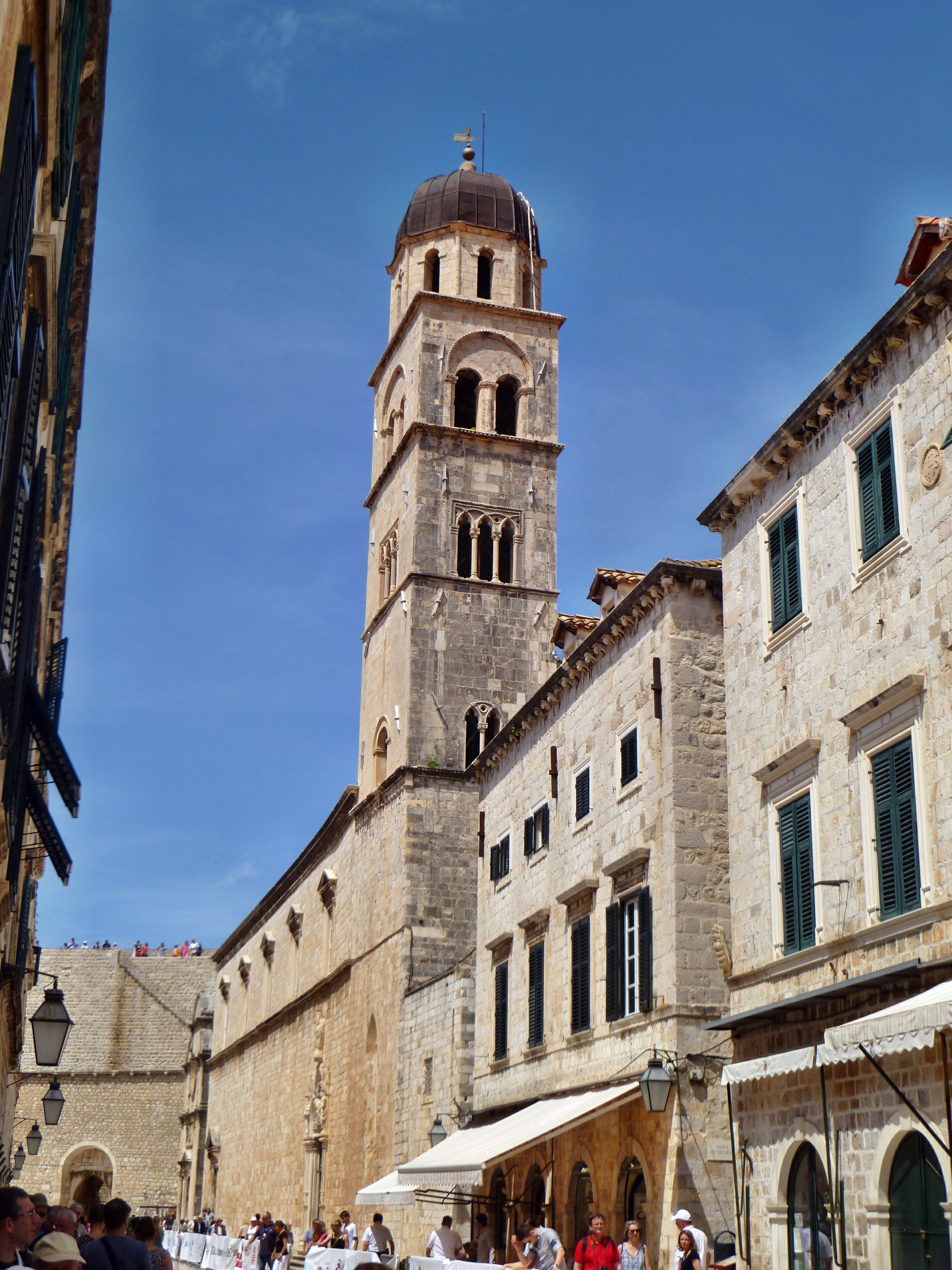 Fort Lovrijenac or St. Lawrence Fortress, often called ``Dubrovnik's Gibraltar``, is a fortress and theater outside the western wall of the city. Its construction probably goes back to 1018 or 1038 and it is located 37 metres (121 ft) above sea level. Famous for its plays and importance in resisting Venetian rule, it overshadows the two entrances to the city, from the sea and by land. Early in the 11th century the Venetians attempted to build a fort on the same spot where Fort Lovrijenac currently stands. If they had succeeded, they would have kept Dubrovnik under their power, but the people of the city beat them to it. The ``Chronicles of Ragusa`` reveal how the fort was built within just three months time and from then on constantly reconstructed. When the Venetian ships arrived, full of materials for the construction of the fort, they were told to return to Venice. 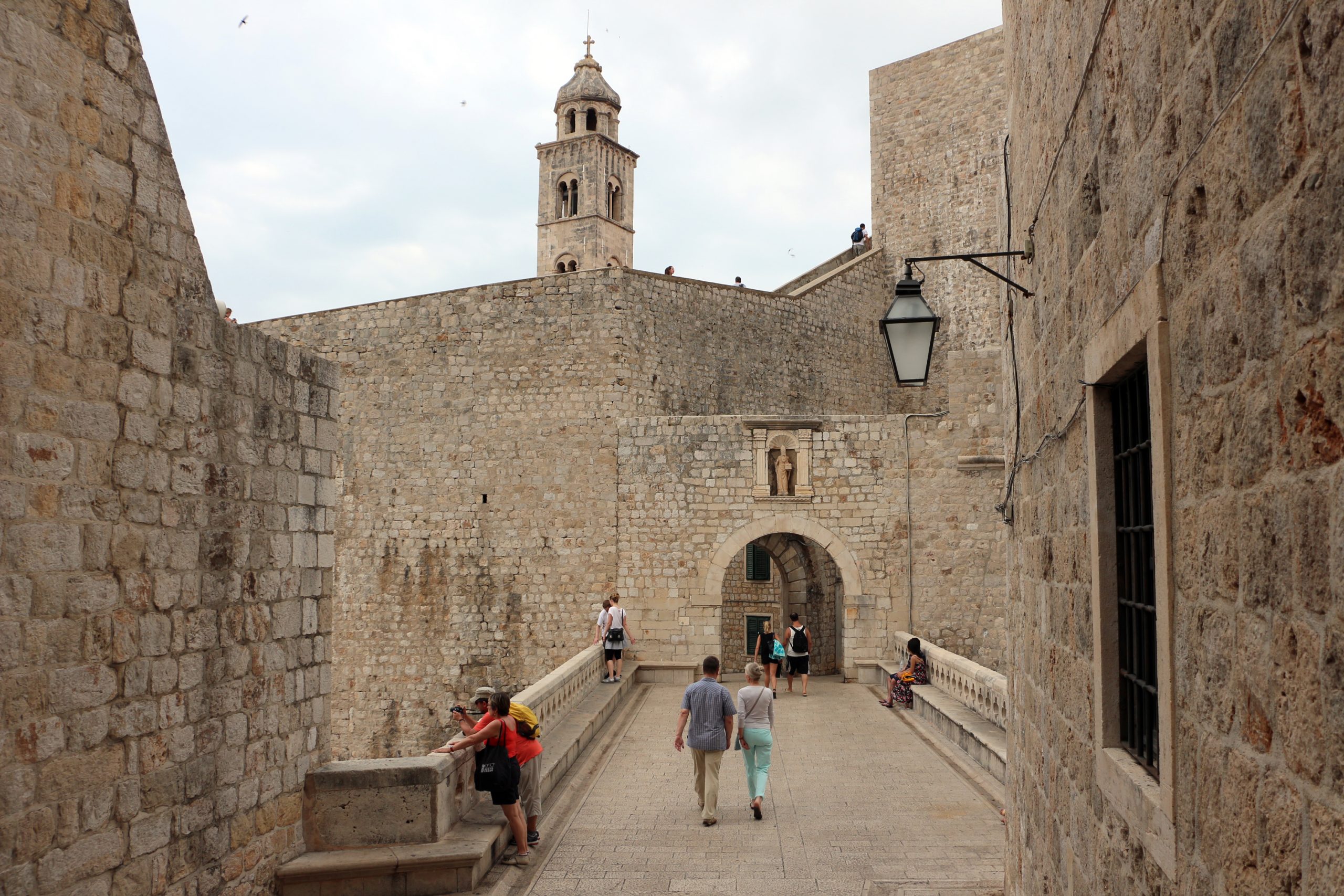 It is the main entrance to Old Town from the Eastern side. Ploče Gate was built at the end of the 14th century and it consists of inner and outer sections. The peculiarity of this gate is a beautiful stone bridge that used to be a wood drawbridge that was useful to prevent unwelcome guests entering the town. The gate allows tourists and locals to reach Luza Square and Stradun.
Franciscan Church and Monastery
The Franciscan Church and Monastery is a large complex belonging to the Order of the Friars Minor. It consists of a monastery, a church, a library and a pharmacy. It is situated at the Placa, the main street of Dubrovnik, Croatia. The earliest monastery was built in the 13th century outside the city walls, while a new monastery was built inside the walls and close to the Pile Gate, in 1317. The whole construction process was very time consuming, in fact it took several centuries to complete the whole work. Additionally, many parts of the complex were rebuilt several times: for instance, in 1667, an earthquake completely destroyed the church which required some serious renovation and reconstruction works.

Dubrovnik City Walls were built all around the Old Town of Dubrovnik to protect the town from pirates and other attacks from the sea. These enormous walls that surround the entire Old Town, with fortresses overlooking the sea, are one of the city’s most famous feature.The walls were built between the 12th and the 17th century, and they are very well preserved until nowadays. They stretch out for about 2 kilometres and they include 16 towers. Among them, there’s Sveti Ivan Tower: the largest tower built at the very entrance to the town’s old harbour Porporela. The walls are about 25 meters high and up to 3 meters thick at the seaside of the town, while on the mainland, they are thick up to 6 meters. From the walls, it is possible to enjoy some of the best views of the city. 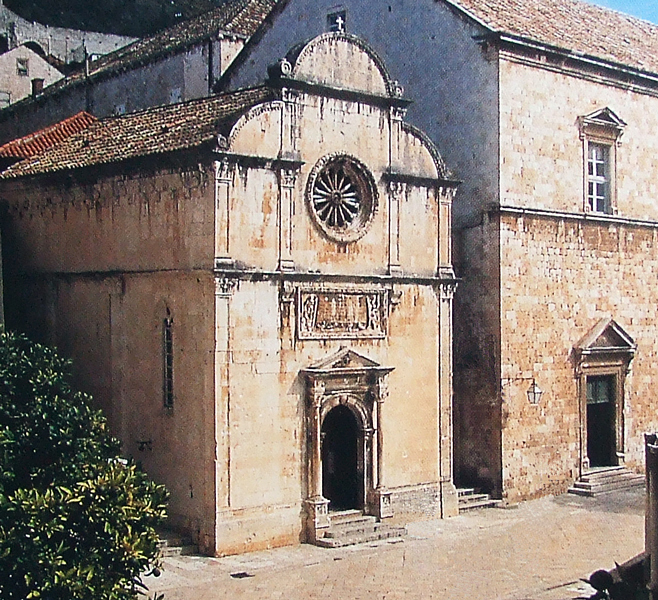 Right in between the Franciscan monastery and the Pile Gates, close to the city walls, there is the Church of Holy Savior. The construction of this small votive church dates back to 1520, when an earthquake struck and killed almost 20 people. The local Senate which governed Dubrovnik Republic decided to commission this new church as a sign of gratitude for sparing the city from even bigger destruction. In 1667, there was another earthquake but the church remained undamaged and it has been preserved to the present day in its original decor. The whole structure was built by domestic master builders from Korcula, the Andrijic brothers, who managed to fit the church perfectly with its surroundings. This church with its decorative facade perfectly represents an important example of the Dubrovnik Renaissance architecture. 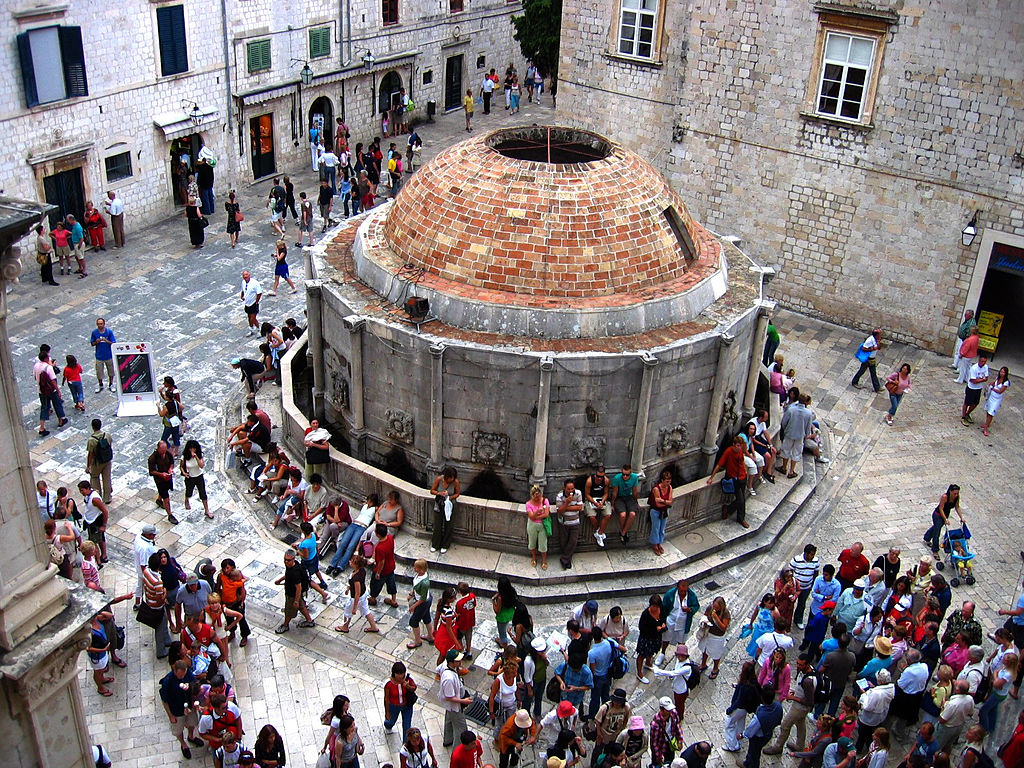 The large Onofrio's Fountain is located at the very entrance to the Old Town from the west. Dubrovnik in the old days had big problems with water, so they had boats that supplied the city with water because the wells were insufficient. At the beginning of the 15th century , the Senate decided to bring water into the city from a spring near the village Knežice (near Šumet) which is nearly 12 kilometres away from the city walls.The project was entrusted to the renowned Italian architect Onofrio from Cava, who built two fountains: large one and small one. From the large fountain, built in 1438, water pours out from 16 spouts and it was used by the locals as a main source of water all the way up to the end of the 19th Century. However, nowadays, the water in the fountains is still drinkable, so feel free to have a drink when wandering around Dubrovnik.

Archaeological research started in October 2018, with logistical preparations (ensuring storage for equipment and archaeological findings, organizing a boat as support for researchers, installation of the pump on a daily basis, etc.). The first, broad look of the wider area around the waterfront, resulted in registered anomalies at the seabed, therefore indicating the need for further archaeological research. Initial clearing of stones by hand revealed an unknown structure, hidden by large stones, which have been dropped to protect waterfront construction from destruction by the sea force, and consequently the structure has been hidden from sight. Later aerial view clearly showed a newly discovered structure that has been devastated by natural forces over time and left unrenewed.

During the research, it has been confirmed that an unknown structure was preserved up to eight strings of blocks from northwest and seven strings of blocks from northeast side. The structure expands in the direction of the visible part of Kaše waterfront, but unfortunately is unavailable due to large stones dropped on the seabed with the purpose of waterfront protection. The whole situation was also geodetically and photogrammetrically filmed, including the seabed situation. By merging all photographs, a realistic 3D model of the whole waterfront has been made.

Kaše waterfront represents one of the most important monuments that symbolize successful and famous maritime affairs of the Republic of Dubrovnik. It is a trademark of Dubrovnik’s Old Port, that can tell an interesting and rich part of the Republic’s history.
In cooperation with the City of Dubrovnik Development Agency DURA Ltd, research has been carried out by the Institute for Maritime Heritage ARS NAUTICA, with the support of the University of Zadar, Croatian Geological Institute, companies GeoMar Ltd, and FOKA Ltd.