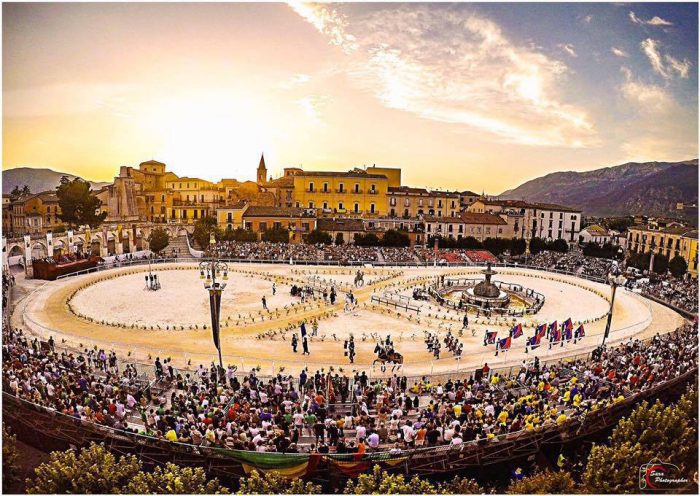 Sulmona’s Giostra Cavallaresca, he knight jousting tournament, is an historical Renaissance reenactment held every summer in the main piazza of Sulmona, in the neighbouring province of L’Aquila. An ancient tradition which was revived in 1994, it now forms the highlight of the city’s entertainment calendar attracting a large number of visitors. The knights of Sulmona’s

From August 27 to 31, Pescara, another important maritime town in the region Abruzzo, hosts the fifth edition of the artisanal beers festival called “Fermenti D’Abruzzo”. Held in the tourist port area called “Marina di Pescara” (Lungomare Papa Giovanni XXIII), this festival features many local breweries, over 70 kinds of made in Abruzzo beers and

In the beautiful fraction of Villa San Nicola of Ortona, this festival is dedicated to the historical reenactment of the old threshing tradition. Besides its maritime history, Ortona boasts a strong agricultural tradition. In the past, the peasant families of Ortona were devoted to cultivating and harvesting wheat which used to be the essential food

On May 2nd and 3rd, Ortona celebrates its Patron, Saint Apostle Thomas, with the Festa del Perdono (Forgiveness Celebration). The feast dates back to 1479, when Pope Sisto IV allowed the plenary indulgence to the believers who were visiting the church of Saint Thomas. The Festa del Perdono is marked by 2 processions of Saint

On January 20th, Ortona hosts one of the most distinctive events of the town: the so called “Vaporetto di San Sebastiano”. Il Vaporetto is nothing but a feast dedicated to the celebration of Saint Sebastian. The event features a spectacular firework show and the famous ritual of “Il Vaporetto”. In the evening, right after the